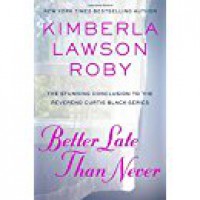 Better Late Than Never is the 15th and final installment of the Rev. Curtis Black series.

When Rev. Black receives an alarming telephone call that his sister, who he hasn’t had any contact with in decades is gravely ill, he rushes to be by her side.  As he spends as much time with her as possible old, disturbing memories of his childhood begin to surface.

Meanwhile, 12-year-old Curtina’s attitude toward her parents start to change.  She turns into a disrespectful and deceitful preteen full of resentment.

Now that Charlotte and Rev. Black are in a good place in their marriage and with their children, a sense of unfulfillment takes control which may cause her to resort to her old ways.

I found this installment to be less dramatic and over the top as the previous novels in the series.  I emotionally connected to some of the experiences in the story. At times when describing the relationships with the older children characters it was too “sugary sweet.”

I must say, in Kimberla Lawson Roby’s style, there’s always a lesson about forgiveness, hope and redemption.  This series was fun and dramatically charged. I believe this series will be missed by many readers, however I sense  a series based on Curtina.