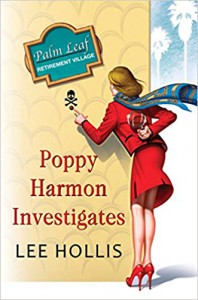 Not only is Poppy Harmon grieving the death of her husband, she learns he has gambled all of their money and left her penniless.

Poppy, a former 80's television actress on a detective show is now in her early sixties and doesn't have a clue where to start looking for a job to support herself.  After throwing herself a pity party her sexagenarian best friends, Iris and Violet suggests she open a detective agency because she loves to solve mysteries on screen and in books.  At first she thinks the idea is ridiculous, however seeing a picture in your mind of being homeless and hungry will change a thought process.  Just because she had a role on a tv detective show will she have the skills to be a detective in real life?

I enjoyed the idea of the author writing this cozy mystery with a "seasoned" protagonist however, that's where my enjoyment stops.  The mystery happened fifty percent into the story.  I felt Poppy should have let her voice be heard more and not be so laid back.  I didn't feel any connections with the remaining characters and didn't agree with the role of one of the characters.

Once the story's pace gets moving, all the suspicions and suspects come into play.  Although there were multiple story lines which added more twists and turns they did connect and were easy to follow. The ending was a total surprise.

Poppy Harmon Investigates by Lee Hollis is the first in the Desert Flowers Mystery.  I hope to see the future releases in this series to have stronger character development and a less lingering of the plot.

Thank you Netgalley and Kensington for the advanced reader's copy in exchange for my honest review.