Cleveland's police forensic scientist, Maggie Gardiner is called to the most gruesome murder scene imaginable.  The victim, a CEO of a mortgage lending firm has met a horrible death and it's Maggie's job to help police detective, Jack Renner catch the murderer.  Without any clues to go on, the deranged psychopath hones in on his next victims.

Perish is the first book I've read by author, Lisa Black.  It is the third book in the Gardiner and Renner series. I would benefit reading the first two books in the series to understand the secretive and strange relationship between Gardiner and Renner; even though flashbacks were given to figure it out.

Thirty percent into reading, I began to pull away from the story.  There was so much detailed writing about mortgage lending and unsavory practices which I didn't understand. However, Ms. Black soon redeemed herself and the "meat and potatoes" were served again.

The elaborate specifics of the murder scenes are attributed to Ms. Black's expertise as a forensic scientist and latent print examiner.  The descriptive, gruesome murder scenes and gathering evidence procedures could only be told by an expert....impressive!

I truly enjoyed reading Perish by Lisa Black.  I will definitely read the first two books in the Gardiner and Renner series.

Thank you NetGalley and Kensington for the ARC for my honest review. The Wife Between Us is a mind-blowing psychological thriller on steroids.

To Vanessa, her life is a fairytale come true.  She marries Richard, a handsome and successful man.  She adores the way he dotes on her and lavishes her with beautiful things.  However, not all fairytales have happy endings.  The light that once glowed brightly has now diminished, leaving Vanessa in a sea of emotions.  Richard has moved on with his life and Vanessa is still picking up the pieces of her shattered life.

Nothing about this story is predictable.  There were a couple of times I had to reread a part to believe what I just read.  The twists and turns are cleverly written and the characters were dramatic and intriguing.  The story moved steady, allowing me to absorb every stirring moment.

If you’re a fan of psychological thrillers, I suggest you give The Wife Between Us by Greer Hendricks and Sarah Pekkanen a try.

Thank you NetGalley and St. Martin’s Press for the ARC When you're twelve years old, playing with your friends and having fun is all that matters.  That's what Eddie and his four childhood friends did when they were around each other.  They even had an unusual way of communicating with each other at times; leaving messages in chalk.

The story begins in England, 1986.  A dismembered body is discovered.  A mysterious man comes to town.  Let's move forward to 2016.  Who's sending chalk messages?

First, I must say this novel has the potential of becoming a good screen psychological thriller. I was held captive once I began reading.  This story is intense and gripping.  Nothing is what it seems and with all its twists and turns, stopping at the end of a chapter wasn't an option.

Tudor didn't skimp on the characterization.  Each character strongly described and just enough sub-characters to keep the story balanced.

I'm glad I read The Chalk Man by C. J. Tudor.  I look forward to reading more of this author's novels.

*Thank you Netgalley and Crown Publishing for the ARC. 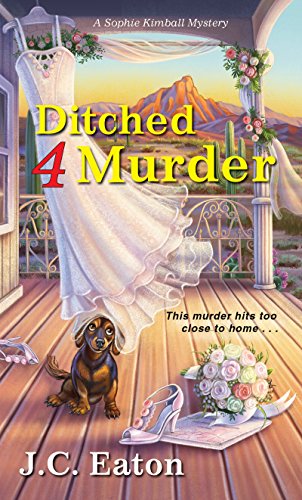 Moving from Minnesota to Arizona was a big change for Sophie “Phee” Kimball. She’s much closer to her mother’s retirement community now—which can drive her a little crazy, but at least her mom, Harriet, has her book club and her chiweenie dog, Streetman, to keep her company. And now there’s even more activity, with Aunt Ina’s upcoming wedding. The seventy-four-year-old bride has roped Phee into working on the tent, the pastries, and even her headpiece in preparation for the ceremony. But it’s Harriet who really gets demanding when a dead body turns up yards from her front door.

Aunt Ina’s fiancé is acquainted with the victim—a local millionaire restaurateur murdered at the golf course. Working for a private investigator, Phee is drawn into the case—not just professionally but personally, since Harriet is in a panic about her safety. With a killer on the loose, Phee vows to figure out the plot—that is, if her side job as a wedding planner doesn’t kill her first . . .

I enjoyed reading Ditched 4 Murder.  There was never a dull moment.  The characters were a riot.  The author effortlessly helped me visualize each quirky and colorful character and every hilarious moment.  However, at times I felt annoyed at the main character for not speaking up for herself too many times in the story.  For the most part the flow of the story was steady, but there were a few lagging moments that took too long to get to the point.

Ditched 4 Murder by J.C. Eaton is the second book in the Sophie Kimble series.  If you're looking for straight-up humor, I recommend this book.

Thank you Netgalley and Kensington for the ARC

Are you my mummy?’

Tessa Markham returns home to find a child in her kitchen. He thinks she’s his mother. But Tessa doesn’t have any children.

She doesn’t know who the little boy is or how he got there.

After contacting the police, Tessa is suspected of taking the mystery child. Her whole life is turned upside down. And then her husband reveals a secret of his own…

Tessa isn’t sure what to believe or who to trust. Because someone is lying. To find out who, she must first confront her painful past. But is the truth more dangerous than Tessa realises?

An absolutely unputdownable psychological thriller with a twist that will make you wonder if you can ever trust anyone again. If you loved Gone Girl, The Girl on the Trainand The Sister this book is for you.

My Review:  I enjoyed reading this fast-paced thriller which kept me glued to every page.  Shalini Boland did a great job expressing in detail what the main character was feeling and going through I couldn't help to feel compassion.  I took joy in seeing the main character's growth from just going through the motions in life to becoming strong and taking control.  The other characters' contribution to the story were traits of selfishness, ignorance, doubt and empathy.

The Secret Mother flowed effortlessly.  It was very easy to follow along with every twist and turn and the short chapters were a bonus.  When I thought I had the story figured out, something else happens.

I recommend The Secret Mother by Shalini Boland to lovers of psycholoical thrillers.  It was hard to put down.  This is the first time I've read her work and I will definitely read more.

Thank you NetGalley and Bookouture for the ARC. Private Investigator Jim Bean is a straightforward, to-the-point man. When his latest client, Sophie Evers, asks him to find her brother Daniel, Jim has no idea how complicated his life is about to become.

Daniel is not Sophie's brother. He is her most coveted prey. Clinging to the belief that they belong together, Sophie kills Daniel's real sister to manipulate Jim into flushing Daniel out of hiding. She will create the "perfect life" for the only man she's ever loved, no matter how many people she must kill along the way.

When Jim discovers the truth about Sophie, he's driven to set things right before her delusional plan claims even more souls.

My Review:  When I read the synopsis of 19 Souls I was immediately drawn in thinking this is really something I could sink my teeth into.  As I began to read the first page an image of an old classic PI scenario flooded my mind.  A cluttered, small office, dust bunnies and papers scattered everywhere.  At the desk sits a chain smoking, rugged PI who looks as if he's had too many benders.  In walks a beautiful woman with bright red lipstick and impeccably dressed looking to hire a PI to follow her cheating husband.

This is where my excitement comes to a halt.  I had a difficult time reading this book.  The author did a great job with characterization.  The way each character was described made it easy to visualize them and each part they played in the story.  My favorite character was a sub character.  The scenes were also expressed in great detail and the plot of the story was stimulating, which kept me wanting more.    However, the pace of the story was too slow.  The beginning of the story began with intensity, but once the killer was revealed too early in the story the flow considerably dropped.

Thank you NetGalley and Midnight Ink for this ARC.

You Never Know What Goes On Behind Closed Doors!! Cons:  A few slow moments, but towards the end I felt it started to rush and slightly predictable.

Pros: I had no idea I would be in store for a crazy good, demented psychological treat.  Every page turned built up anticipation for the next page.  The way B.A. Paris sets the pages for a smooth, gentle ride....then immediately shifts gears to a psychotic roller coaster ride.  The chapters switched from past to present which helped me fully understand the main characters' personalities.  I was absorbed in every page due to the intense characterization and gripping plot.

"You never know what goes on behind closed doors" is a true adage when describing this book.  On the outside everything looks perfect and on the inside everything is dark and evil.  I highly recommend Behind Closed Doors by B.A. Paris to all readers who enjoyed a fast paced psychological thriller.  This was my first time reading one of this author's novels and have since added another one of her thrillers, The Breakdown as no.1,500,000 on my TBR list.